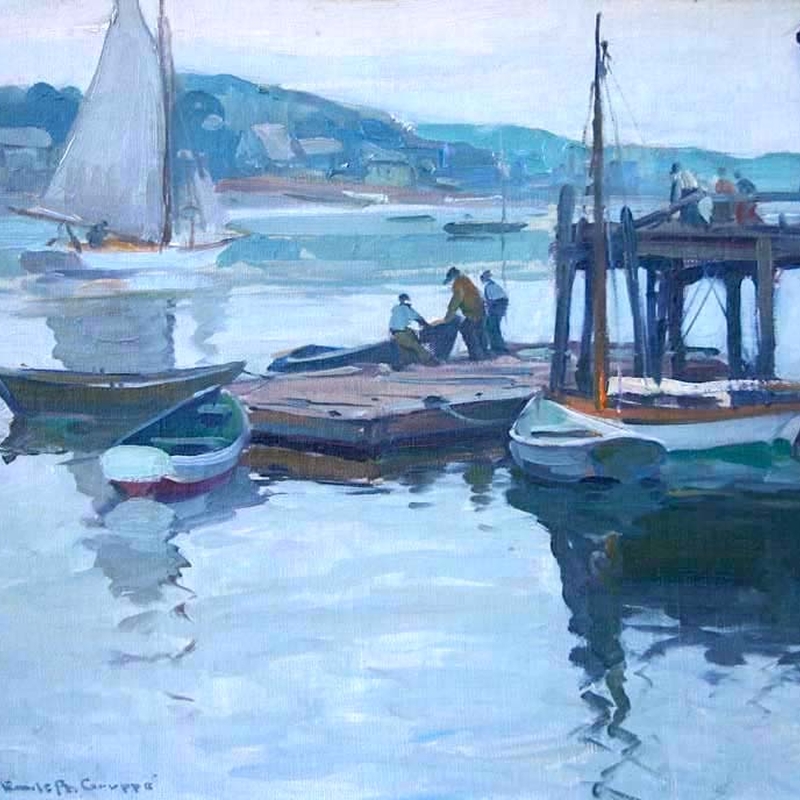 Emile Gruppe was the son of the painter Charles Gruppe, who lived and painted in Europe for 25 years before moving to the United States. Emile’s artistic training began early under his father and continued at the Carnegie Art School, where he studied with George Bridgeman; in Woodstock, New York he trained with John Fabian Carlson; in Provincetown, with Charles Hawthorne, Richard Miller, and George Chapman. Clearly, after having studied with these men, Gruppe was well versed in the style of American Impressionism. However, he was also greatly influenced by Claude Monet, most notably the Water Lily Series, as seen in his palette and loose handling of the paint.

Gruppe resided for most of his career in Gloucester, Massachusetts. He also lived in Jeffersonville, Vermont and Sarasota, Florida. However it was Gruppe’s paintings of Gloucester and Rockport that won him the most acclaim. By 1930 the artist was best known for his deft, post-impressionistic scenes of the landscape, most notably the docks and villages of Gloucester and Rockport. His views of a locale would change according to time of day, season, and vantage point, and in each he would masterfully combine a heavy impasto with a lightness of touch––a style that was distinctly his own. While Gruppe achieved most of his acclaim for his landscape paintings, he also painted figures and portraits.

Gruppe was fiercely committed to his art and equally passionate about discussing ideas. He founded the Gruppe Summer School in Gloucester with his own teachers, Bridgeman, Carlson, Chapman, and Miller. Gruppe was an active member of the Salmagundi Club, Rockport Art Association, and Allied Artists of America, to name only a few. His works are part of such reputable institutions as the Los Angeles County Museum of Art, Smith College Art Museum, The White House, Montclair Art Museum, and the Butler Art Institute.